So. I have a big pile of films that I haven’t got round to watching because they variously looked bad, confusing, or just not as good as films that I could have watched instead. This is the second in the series of reviews of these films.

I went into this film knowing nothing about it, kind of live reviewing again.  We’ll see how it goes.

The opening establishes our characters as techy hacker types, one of whom is disabled. The director seems to be aware of the ridicule levelled at the portrayals of hackers in films such as, uh, Hackers, and so it involves some actually techy terms – like Defcon, IP and Linux.

OK, I’m actually moderately impressed that they bothered to do this, but still, we get the typical 2 minute hacking scene instead of 6 hours of two dudes drinking Mountain Dew and looking at 2 lines of code. Fair enough, compromise is important.

23 mins in: OK, I am officially gripped.  this film is actually good so far. The sound design, in particular, has been excellent throughout, setting a refreshingly minimalistic tone. The camera work supports the sound design, the teen romance elements haven’t been annoying, and suspense is definitely occurring. It’s going well so far.

Well! Just as I typed that last sentence and settled back…EMERGENCY!

Nothing’s ever easy is it? I finally find a good film and the downstairs neighbour’s burglar alarm goes off at maximum volume at a quarter to nine at night. We don’t know how we silenced it, only that it finally stopped. Emergency over.  Please resume watching films.

See? Blogging can be rough, man.

Hmm, it just occurred to me that a particularly loud signal interrupted my viewing of The Signal, just as they were starting to talk about ‘the’ signal. Signal-ception? Enough of that, back to the film….Or, perhaps not.

To be frank with you, this review really hasn’t turned out the way I thought it would.

I got completely into this film.  I enjoyed the pacing, I enjoyed the acting, and I thought it was well executed.  I’m actually not sure how I avoided hearing about it until now.  So, rather than go through it piece by piece as I had originally intended, I stopped typing and watched it properly.  Furthermore, I don’t want to reveal any of the plot – even with big fat spoiler tags on. If you want to know what happens, you should watch it.

This film is, in my opinion, very good. It is an interesting twist on the sci-fi genre, and as such deserves to sit alongside other excellent modern and slightly off-piste takes, like Moon. I think its kind of a nice mid way point between District 9 and Inception, certainly in terms of the aesthetics of the stranger things we get to see.

The ending is slightly left field, although it’s not like it’s that bit in Interstellar where Matthew McConaughey is rearranging time through a magical bookshelf. If you can handle that, you can handle this.  Either way,  I certainly didn’t see it coming, and I liked it.

I think you should watch this film. The sci-fi tag might put you off, but its a slow burner that plays with the genre enough to entertain people who might, for example, hate Star Trek.

So. I have a big pile of films that I haven’t got round to watching because they variously looked bad, confusing, or just not as good as films that I could have watched instead. This is the first in the series of reviews of these films.  Buckle up (hur-dur plane joke. Last one, I promise). 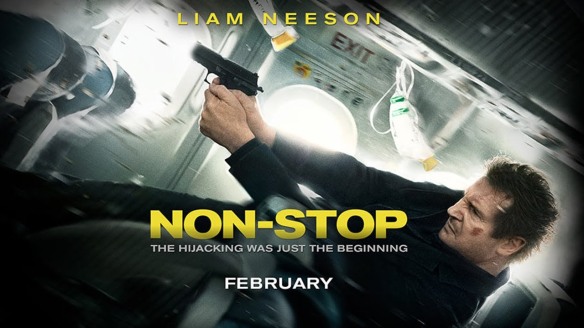 This is another film in which Liam Neeson is inexplicably cast as an action hero. This time, he’s a US federal air marshal on a plane  who starts getting text messages from someone claiming to be on the plane with him. The text messages go back and forth a bit, then he gets a demand for 150 million bucks or someone on the plane will die.

It takes about 20 mins to get to this stage, and I’m kind of live writing this review, so I’m a bit distracted.  But let’s be honest here, if the first 20 minutes hadn’t solely consisted of the by now confusingly standard moody shots of Liam Neeson looking moody in moody lighting from a moody camera angle, then I wouldn’t have gotten bored to the point of deciding to write about it while watching it at the same time.

Seriously. I don’t get it.  What’s the fixation? I mean, he was even a Jedi. What the actual fuck? Are there that few action heroes in Hollywood left that can get parts these days that people are forced to give them to Liam Neeson? Does he have something on someone? WHAT IS HIS SECRET?

Oh and that chick from Boogie Nights is in it too, she’s one of his co-passengers.  Again, live review here, so I’m thinking she’s fairly suspicious as she’s the only other famous person in this film so far. Oh, so he just talked to Boogie Nights chick and told her what’s up. (I’ll add her name in later. Probably) oh and now there’s turbulence. Super, super exciting stuff here folks.

Jesus, the text messages just mentioned his daughter.  This is just going to be fucking Taken, but on a plane, isn’t it? Yeah there you go, he’s been betrayed by his special agent buddy, Hammond.  Quite a nice fight scene in a plane toilet has just happened though, that must have been a nightmare to film – it’s hard enough to take a shit in one of them. Imagine trying to fit a lighting rig into one.

So this film is Snakes on a Plane without snakes or being good, and Taken without the ground….And oh god, there’s an hour and ten minutes of this left…

…I have to level with you. I just took a 5 hour break in the middle of watching and writing this. It’s fair to say I’m not exactly gripped. Oh yeah, I think the Boogie Nights chick is called Julianne Moore. Onwards.

OK, so there’s some twists and turns in here, Agent Hammond had a suitcase full of coke and now Liam Neeson is explaining why Hammond is now a dead guy to the air hostess and OH MY GOD THERE’S AN ETHNIC GUY ON THE PLANE oh wait he’s a doctor, oh wait its molecular neuroscience and we have no idea what that means.

I, like I suspect many people who watched this film, am completely distracted by wondering what exactly the point to all this is going to be. Is it a pro TSA movie? Is it anti-surveillance? Is it all just a vehicle to further Liam Neeson’s confusing place in action cinema?

Hahahaha, pilot down. I have to be honest, this is kind of like a version of Airplane!, if Airplane! wasn’t funny or good. The situation continues escalating and a good old fashioned rabble occurs about an hour in.  Liam Neeson solves this with the healing powers of consumerism (seriously). Now some more plot twisty background stuff happens.

If I could have picked anyone for this role I would have picked Harrison Ford. Harrison Ford is cool.  He’s all craggy, and the Star Wars he was in was actually good. On the off chance that any Hollywood casting agents are reading this, give Harrison Ford a shout next time a script like this turns up. Just thinking out loud while I watch Liam Neeson be not great at action films.

Got distracted there. I’m sensing a pattern.

The sound design isn’t too bad in this, and while it’s predictably shot, it’s at least technically proficient. It’s not a terrible film at this point, it’s just not good.  I feel like I maybe would have cared about this more if I was an American who caught a lot of domestic flights.  In fact, the film has just slightly ham-handedly inserted a bit with the media being all sceptical of the TSA, approximately 1 minute before Liam Neeson (now the prime suspect because plot twists) finds a bomb. A COKE BOMB. Subtle.

So there go any moral quandaries you might be having about the film and the surrounding laws.  You are here to watch America save the day through increased surveillance, and to watch Liam Neeson be a flawed American every-man and save the day. Sort of like a really shit American version of Braveheart.  Sort of.

I saw a horror film recently called Panic Button.  That was actually sort of similar to this film, but way better. Watch Panic Button instead of this.

Right, into the last 30 minutes now. The home stretch.  We can do this.

The aforementioned last 30 minutes of this film are not for people who suffer from motion sickness or dislike shaky cams. OHHHH WAIT! Social media twist! That’s made this whole thing totally relevant. Actually, there’s quite a nice device used throughout the film, where any phone message or video is displayed as an on screen overlay.  It’s pretty cool and is helpful in the big social media reveal scene i just mentioned – but don’t get me wrong, it’s not saving the film.  The message here, with 15 minutes left, is hammered into our heads as if we’ve done something wrong and the director wants us to know it. In fact, who the hell directed this? I’ll look later. Right now its the end bit and this is clearly where a lot of the budget went so I’m going to watch it properly.

Well. I went into this film with pretty low expectations, and it happily met them.  It is an attempt to humanise the TSA, a controversial part of the wider global surveillance culture that we are happily growing for ourselves.  I guess that’s my main problem with it. It’s just all so fucking obvious.  I mean, yeah there’s some twists that are, I guess, meant to make us consider our prejudices, but for a film to make an audience do that, it needs to connect on some emotional level that non-stop, in my opinion, totally fails to.

That said, the last 10 minutes or so were cool enough. There was a bit that reminded me of Max Payne, so that was nice.  Man, I should totally play Max Payne again.  Seriously though, watch Panic Button. Not this.

2 Inappropriately located Liam Neesons out of 5.

Welcome back for Part 2 of my guide, enjoy!

So you’ve decided to include some video on your website, or to use a promotional film to market your brand. Congratulations! But what’s next?

Below I have included a few tips to help you to start to plan exactly what you are saying and who you are saying it to. This is by no means a comprehensive list, just intended to help you think about the end goal for your digital content as having this in mind at the start of the project can be invaluable!

then the blog will commence properly.  there will be updates on various movie projects i have in mind, as well as anything else that occurs and is film related.